There is one thing about the history of stand up paddle boarding that’s clear and that is not much about it is clear at all. There is even some debate about what stand up paddle boarding is historically and how practices like sculling or punting factor in. Everyone suspects this is an ancient practice. If you’ve ever done it, you know it quickly feels natural to stand up and propel yourself forward over the water. The fact of the matter is we don’t know for sure how ancient the practice of stand up paddling is or where in the world it actually came from. Peruvians are said to have paddled Totora reed rafts millennia ago and southern Africans may have used reeds to propel themselves on floating platforms to fish. The practice certainly seems like it could be old, but to date there isn’t a wealth of literature to go on. 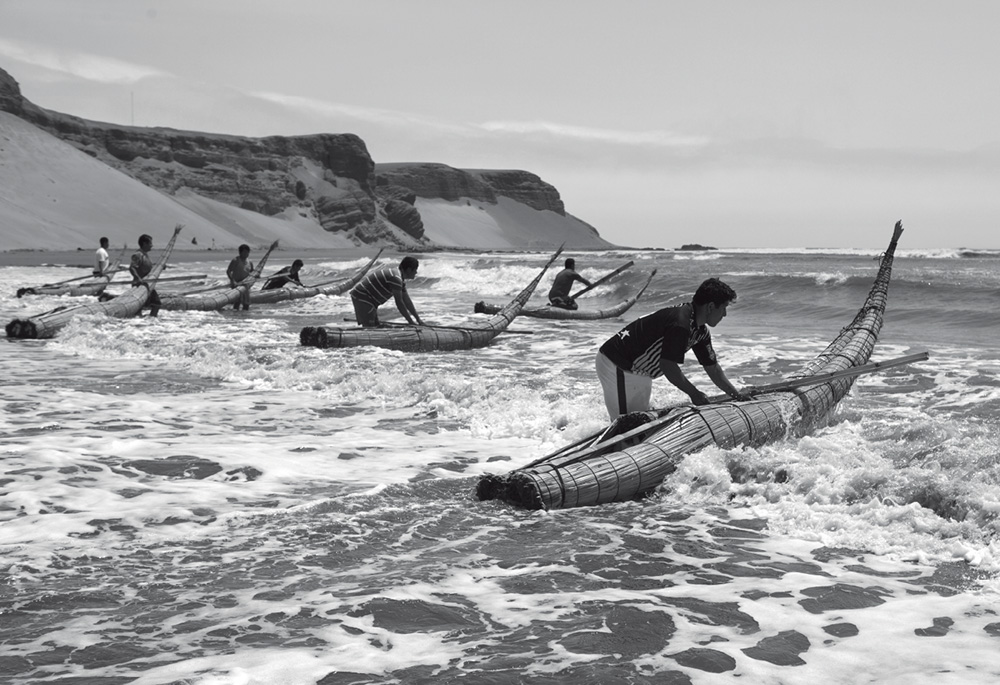 When exactly was Stand Up Paddle Boarding invented?

We know for certain that canoes and rafts of all kinds were used by our ancestors to cover immense distances between land masses.  In essence, paddling helped us populate the Earth as we know it spreading our genes far and wide. At some point, someone stood up on their bundle of sticks to get a better look at their surroundings. They probably took their first stroke on two feet not long after. I will bet that when they did, it didn’t occur to them that they’d invented a new sport and spawned a huge industry. Of course I could be wrong, they may have even been total elitists calling anyone who tried to follow suite a kook. But I digress…

We want to live where @simmilovessummer lives! ???? Tag us in your photos @bluefinsups ・ ・ ・ “I wonder if we ever think of each other at the same time.” ? On Friday in the early morning the ferry is going back to Italy. On one side I don’t want to leave, because I love this place so much. And the other side is, I’m missing my home and a few people around me. Well the… have a great evening and see you tomorrow. ?? #beachlife #beach #ocean #sea #seaside #blue #sky #goprohero5 #summerfun #ilovesummer #travel #travelgram #igtravel #travelling #wanderlust #goprophotography #greece #lovetotravel #naturelovers #paradise #sup #standuppaddle #bluefinsup #bluefinsups

What I’m trying to say here is that it’s not unlikely that Stand Up Paddling emerged out of practicality rather than leisure. It’s also probable that this wasn’t considered a specific discipline all on its own for much of its history. In fact, if you had asked someone a few thousand years ago or even a few hundred, it probably wouldn’t have seemed remarkable at all. It was something people did to see above reeds, waves or whatever else was blocking their view as they travelled across the water. 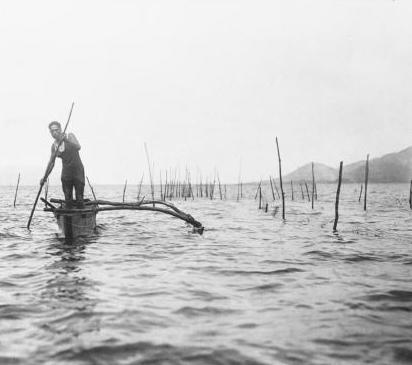 In terms of human history, the seated paddling of rafts and canoes is the close older cousin of boogie boarding and surfing. Without them we wouldn’t have the sport of SUP.  Surprisingly Polynesians began surfing over 3000 years ago out of sheer pragmatism rather than a love of expensive boardshorts and stylized surf gear. It was simply easier to get a day’s catch back to land on a board above the water than to swim it in to shore past every shark in the neighborhood. As with ancient practices like canoeing or even cooking meat over an open flame, at some point surfing became recreational as much as practical.

There is no exact record of when stand-up surfing became a sport. It is known that during the 15th century, kings, queens and people of the Sandwich Isles were big into the sport of “he’enalu” or wave-sliding, in old Hawaiian,. “He’e” means to change from a solid form to a liquid form and “nalu” refers to the surfing motion of a wave.

“The origins of surfing” – source iml.jou.ufl.edu

So naturally, the first place I think of when I think SUP is the South Pacific and I’m probably not the only one. As evidenced above, we know that Polynesians have a rich history of close kinship with the water both for survival and for fun. It would be convenient if we could neatly attribute the origin of SUP to this region but so far as anyone knows, we can’t. Although surfing certainly came from this area, there doesn’t seem to be any decisive evidence that ancient polynesians pioneered paddling on foot.  It’s more likely that the practice was diffuse among various sea and river-faring cultures. The world awaits the PhD student who hits the archives to research this further.

SUP as a modern sport is also a little foggy but it does have a decidedly Hawaiian influence dating back to 1950s Oahu. Surfing’s popularity was making a massive come back and the Waikiki beach boys of the south shore were pioneering the wave riding renaissance. This group of native Hawaiians and a few lucky continental interlopers were famous fixtures on the big island.  As an informal welcome wagon to the land of Aloha they could often be seen riding waves, giving surf lessons to tourists and generally enjoying the hell out of life. In the midst of this mid-century watersports revival the practice of stand up paddling re-emerged. Among these legendary beach boys was Duke Kahanamoku, native hawaiian and famed athlete also known as the father of modern surfing.

Some time in the mid 20th century Pennsylvania transplant John Zapotcky Sr saw Duke surfing a wave with the help of a paddle. He was suitably impressed and asked him what he was up to. The rest is SUP history. John Pops Ahchoy turned to stand up paddle surfing, sometimes in a hard hat, for more practical reasons.

“He would keep his cigarettes in the hat so they wouldn’t get wet, and would also smoke a cigarette or two between sets.”

These men and their equally impressive peers are credited with laying the groundwork that has popularized the sport today. 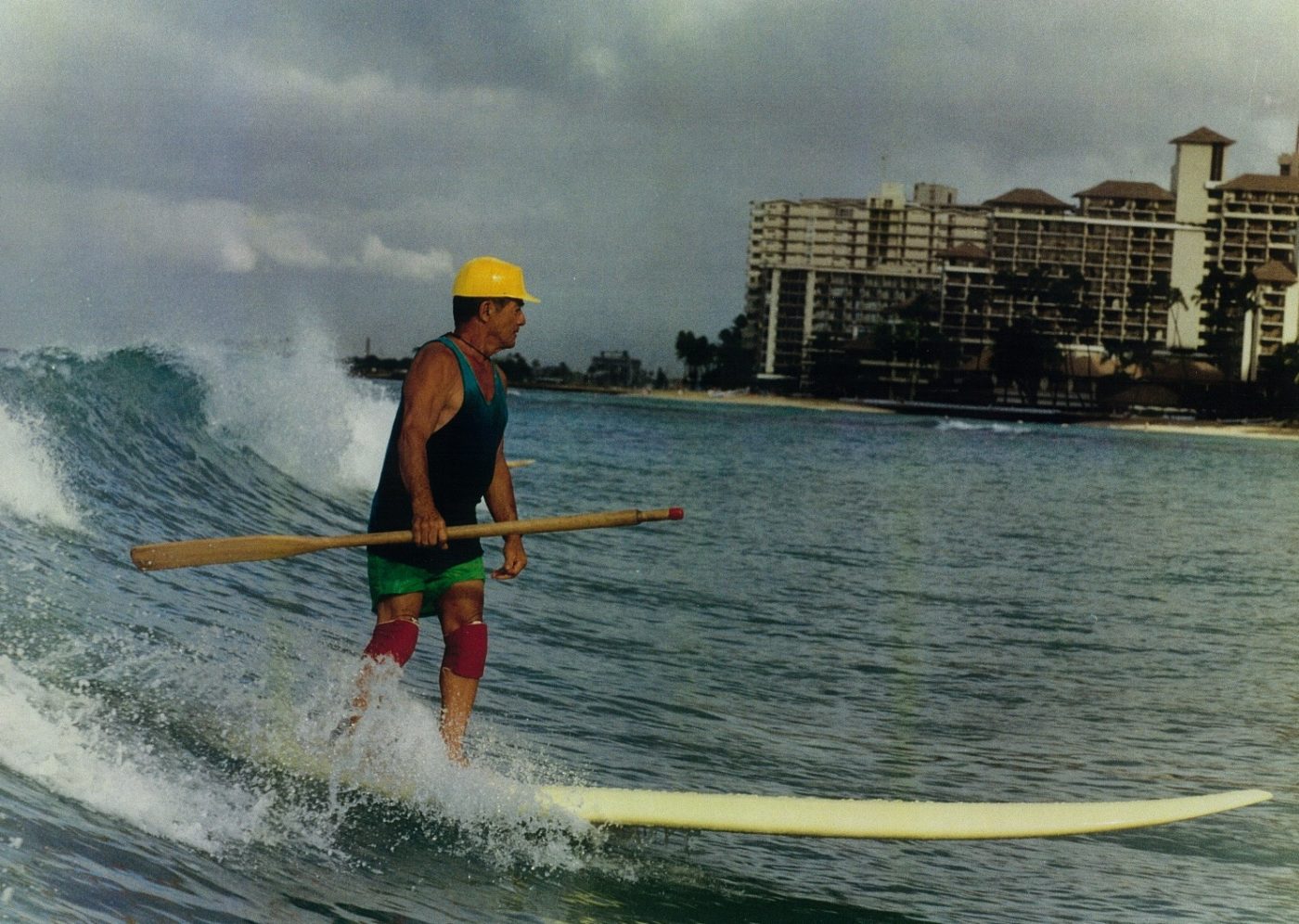 Let us not neglect the Australian Surf Ski which was a wooden craft used by lifeguards down under. The surf ski could be paddled either seated or standing and modern versions are still used today.  Duke Kahanamoku travelled around the world in the capacity of a film star, olympic swimmer and surfer so it is possible he came across this Australian delight at some point. 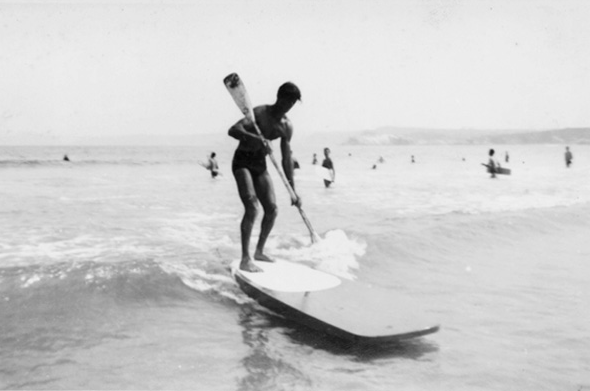 From Surf to SUP

Fast forward to the mid 90s and the legendary Laird Hamilton. The same guy who mainstreamed big-wave tow-out surfing also popularized Stand Up Paddle boarding. Laird thought standing on a board while staying dry had its place and naturally he was right. Although SUP had been in practice among a small group of ocean elites in Hawaii several decades earlier it still hadn’t spread widely. I can only guess it seemed like an esoteric, experts only activity in the interim. I can also imagine that many potential SUP enthusiasts were hesitant to try and occupy real estate traditionally dominated by surfers. 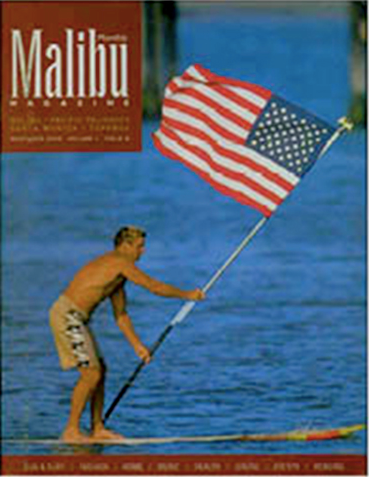 Or maybe they just didn’t want to feel like they looked like the first person brave enough to rollerblade in public:

Back to the surf legend himself, in the mid 90s Hamilton began playing around with the concept of stand up paddling.  By the early 2000s he commissioned what was the the first purpose built SUP paddle. The initiative to tailor his equipment specifically to the activity is what differentiates him from all the other SUP pioneers. The sport exploded from there likely because:

3. You don’t even need waves

4. Laird Hamilton said it was cool

From that point on SUP spread like absolutely wild and has only continued to do so. SUP history continues to be written each day as more riders are taking the sport to more places than ever before pushing boundaries we never knew were possible. This is one future anthology that won’t be boring to read because it may well be the most versatile, highly accessible water sport known to man. Don’t let worries like whether stand up paddle boarding is hard stop you from being part of it all. With a little practice, pretty well anyone can get in on the fun. There is also a wealth of stand up paddle boarding tips to be found online and you will pick up technique easily as you go. Don’t be shy, even Laird Hamilton started somewhere! 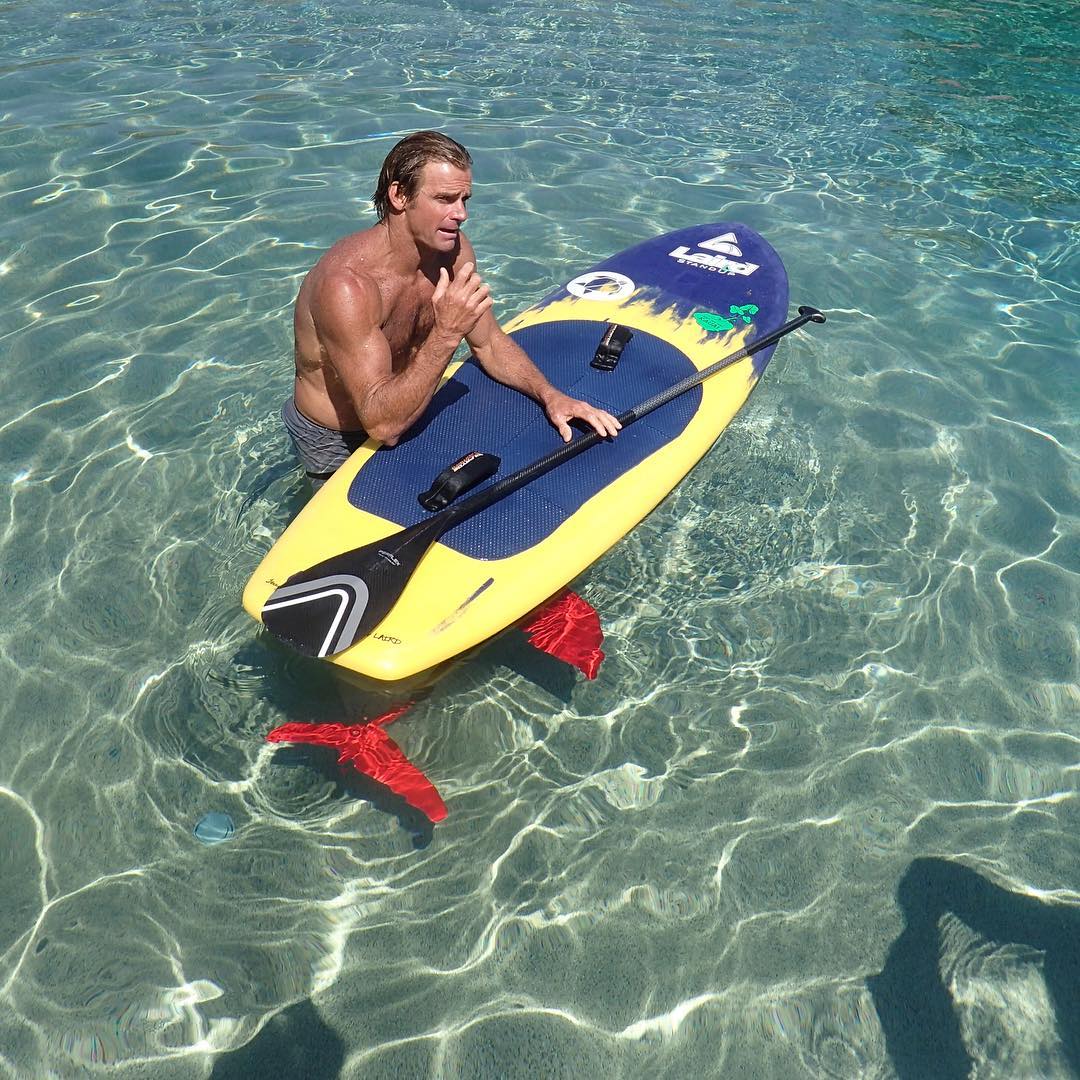 Laird Hamilton relaxing with his SUP

A BIG BLUEFIN THANK YOU

You can always trust locals to give the rights details. Hawaii’s own Free Surf magazine gave us awesome insider details into the lives of Waikiki’s Beach Boys.

Iskigakilovessup took the gorgeous picture at the top of this post.  Check them out on instagram for more stunning SUP shots all the way from Okinawa.

We were fortunate to find Historia de la Tabla en el Peru’s detailed article on the history of indigenous fisherman surfers and the Totora reed craft.

Sup the Mag and Surfer Magazine writer Brad Melekani. He’s a Surf Journalist and English professor  and has written a super history piece with great detail on all epochs of the sport. He also took the time to dig through the archives of Malibu Magazine for the shot of Laird’s memorial SUP with an American flag post 9/11.

The University of Florida’s college of journalism gave us a very interesting snippet on the origins of surfing in Western polynesia.

Hawaii.com’s photo-biography of the men who revived surfing and shared it with newcomers was heartwarming and detailed.

The John Pop’s Achoy Foundation has a treasure trove of Pop’s SUPing in a hardhat.  These pictures are priceless.

Surfer Today did a fantastic bio on the guy who started it all, Duke Kahanamoku.