Let’s talk about how to stand up on a surfboard and why it matters for SUP. First of all, if you’re standing up on any board, there is a good chance you’ll fall at some point. So whether SUPing or surfing, you’ll need to know how to get back up eventually. How you’ll do this and what technique you’ll use will depend on what you’re surfing and what you’re trying to accomplish.

The difference between traditional surfing and SUP surfing comes down to when you stand and for how long. Traditional surfers spend a lot of time on their stomachs and that’s not because they’re lazy. They rely on the power and reach of their arms alone to paddle out past the break. Then, they use them again to paddle like crazy to catch the wave. If all goes well, it’s at this point that they pop up to standing. 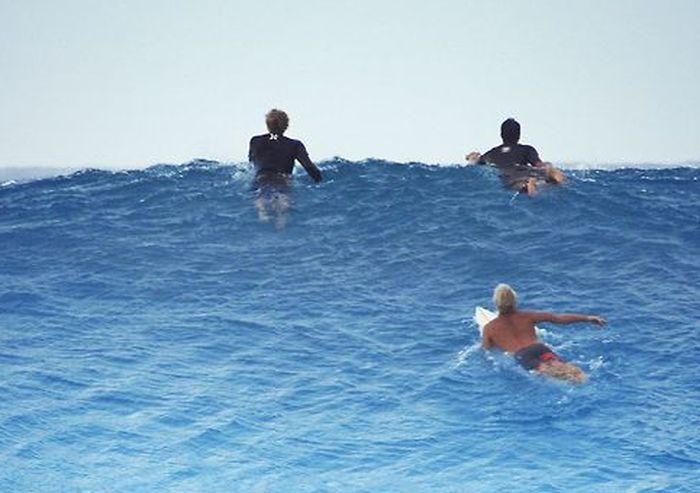 Surfers powering over a wave

“Surfers paddle to the line up” – Source surfsrilanka.org

Standing for SUP vs. Standing to Surf

SUP surfers on the other hand stand to paddle out and to catch waves. They continue to stand and use their paddle for turns and balance. SUP surfers don’t always sit in the water to wait for sets like surfers do. Instead, they’ll often keep paddling down the line or just stand or squat between sets.

Standing while you wait might seem unmanageable but many SUPs are higher volume than surfboards. This allows them to stay above the water better when not in motion. In any kind of surfing, timing is everything and one of the trickiest executions for paddle boarders is the turn right before catching a wave. This takes a change of direction and change of footing which requires balance and good timing. It’s also a great time to fall. 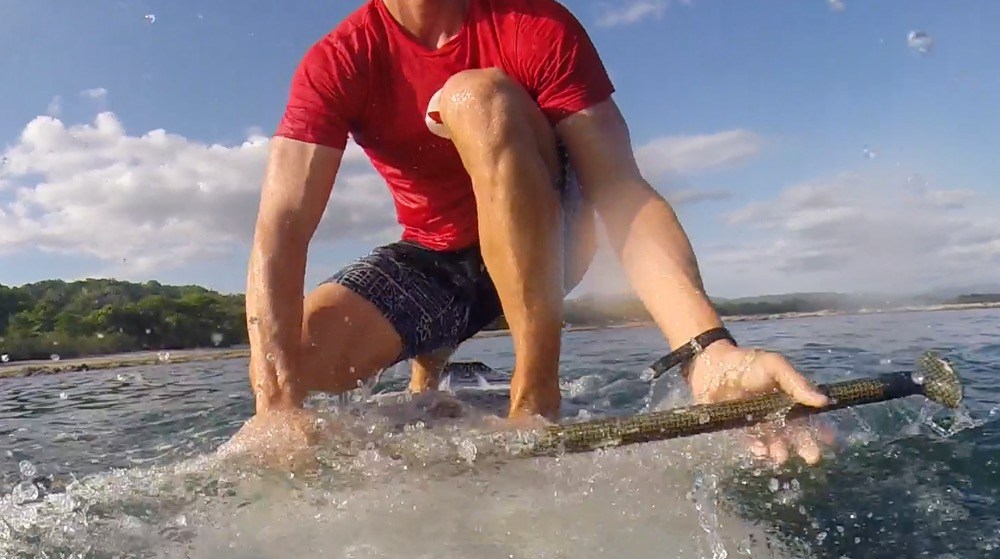 The Progression Project’s Erik Antonson pops up to SUP

“Pop up to SUP” – Source progressionproject.com

Why do I need to know how to stand up on a surfboard?

Learning how to stand up on a surfboard is actually applicable to paddle boarders. Depending on the types of waves you’re surfing or the length of time between sets, you might want to take a seated break. It’s also useful if you fall off your board and need to get back to upright. The transition between sitting, lying and standing on your paddleboard is applicable when you are:

–tired and need a little break

–stunned that dolphin has launched itself into your face

–biting it when trying to turn for a coming wave

–have bitten it while semi-successfully riding a wave

–startled that the “Help, I’ve fallen and I can’t get up” button isn’t waterproof

On a side note, SUP surfing has a few distinct advantages over traditional surfing. Some staunch traditionalists might even consider them cheats.

Pop up technique on your SUP or surfboard

On to the mechanics of standing. The process of going from prone to standing is called popping up. Technically, this is done at speed in the process of catching a wave. There is a technique to it which allows you to rise quickly while maintaining balance.  Especially tricky is that a true pop up is done in motion while timing out when to stop paddling and start surfing.

As with anything this is part practice, part strength and part confidence. The best path to mastery is dry drills followed by practice in the pool or calm water.  Once you are victorious in those scenarios, start implementing the pop up in your attempts to catch waves from prone.

Popping up on a paddle board will appeal to you when your ability to SUP surf has gotten sharper.  The Progression project has a great article on how to to do this. It’s particularly appealing when paddling shorter, lower volume more surf specific SUPs. One thing that is more complex for paddleboarders is what to do with the actual paddle:

“Once you get control of the paddle with the blade in the water you’re in a very stable position.  This is the position that I’ll wait in the lineup in instead of sitting down sometimes. You’re in surf stance so you can catch a wave in 2 second with two or three strokes.”

Ok, so in terms of paddle boarding most of the time we won’t be “popping up” in the strictest sense. We won’t generally be doing it in the process of catching a wave or when transitioning from prone paddling to standing. That’s not to say that some SUP surfers don’t, but for most casual use it’s a little jazzy.

Learning how to stand up faster on a surfboard still applies to paddle boarding, even when you aren’t surfing your SUP. The same muscles are used and the motion of getting up is similar, just simpler. In the event you do want to expand your repertoire someday, it’s good to know.

How to get back on your SUP after falling:

Here is a scenario most of us can relate to. We’ve sup’ed, we’ve fallen and we’d like to get back up. If you are being battered by surf this is going to be a much more complicated scenario. For our purposes as low key paddle boarders and SUP surfers, let’s assume that conditions are more or less under control.

Grab one rail of your board and flip it upright if necessary. Now, either shimmey up the tail end or over the center of the board like a seal, but a seal that is using its legs to kick. Once you’ve got your torso out of the water, turn your body so your head is facing the nose of your board and swing, scramble or two-step your legs onto deck.

Take a moment if you need to and then bring your legs beneath you. Assuming you have managed to keep a hold of your paddle in this process, rest it on the deck and get ready to kneel with the assistance of your hands. When kneeling, pick up your paddle and step one foot forward then start to raise yourself up to standing.

Voila, this is sort of like a slow-mo pop up. With a little practice, you’ll master the pop up, strengthen your core and expand your bag of tricks in no time flat.

A BIG BLUEFIN THANK YOU

The Progression Project is a wealth of information on all things SUP Surf.