Most kayakers would never think of swapping their main ride for a SUP kayak combo, much less think of doing so on a 40 mile paddling trip. Fortunately for us, our SUP-curious friend Charlotte is both open minded and adventurous. On her recent expedition through through the Caledonian Canal, Charlotte traded her sea kayak for a 12’ Bluefin Cruise. Not only that, she completed the majority of the route using our kayak conversion kit rather than stand up paddling. Charlotte’s take will be useful for anyone trying to decide whether a SUP Kayak hybrid is right for them. Better still, it may surprise die hard kayakers.

To give you a little background, Charlotte is an experienced sea kayaker and all around outdoorswoman. She is used to putting in the miles with a kayak paddle and has the delts to prove it. She had only owned her SUP for 6 weeks before packing it up for Scotland, talk about gusto! 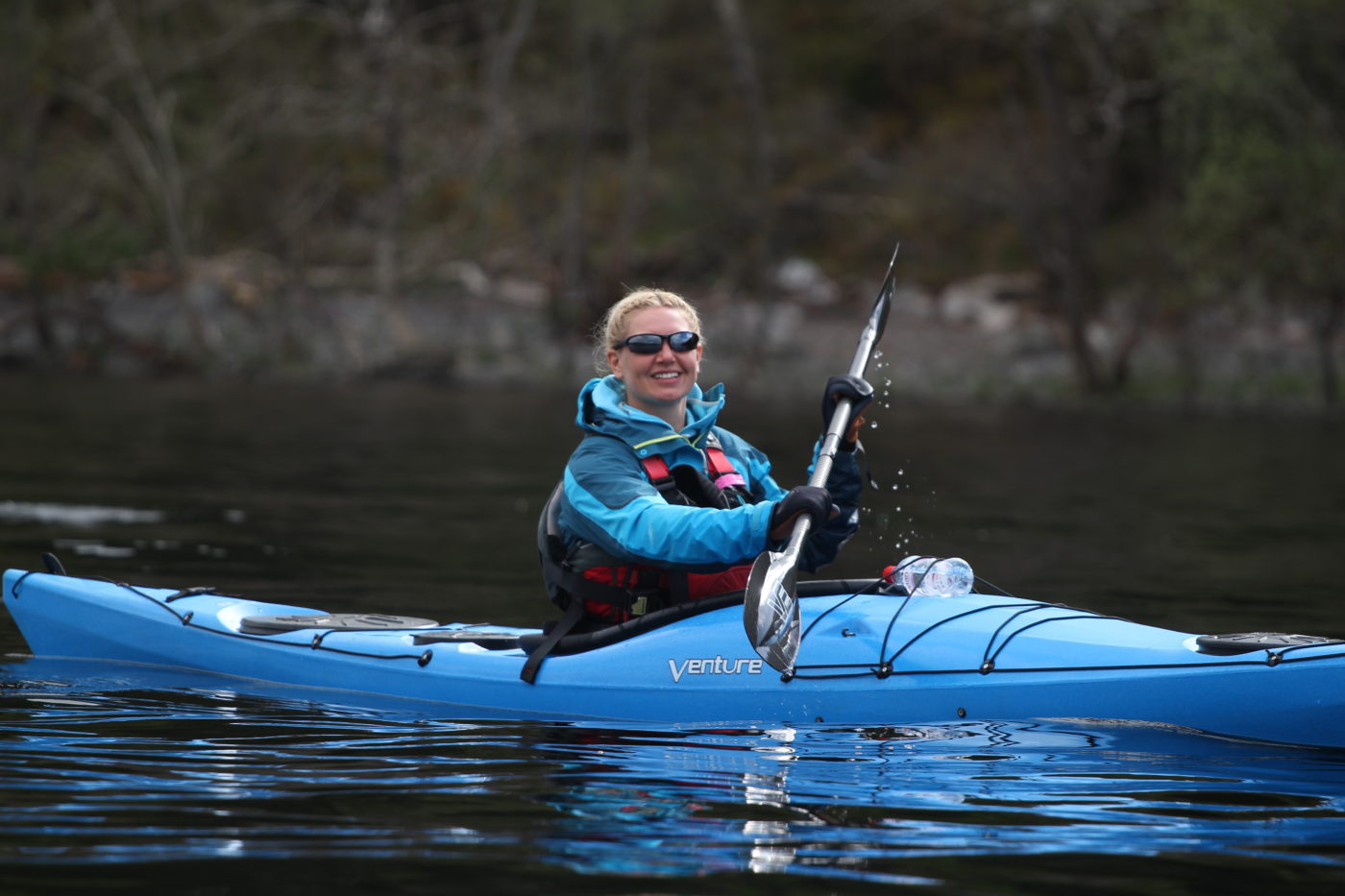 Why paddle a SUP seated rather than standing?

For the simple reason of familiarity, Charlotte chose to paddle seated for most of the trip.  She and her partner Ian had 3 days to paddle 40 miles from Loch Lochy to Inverness. It was easier to get up the necessary speed in the paddling stance she knew especially considering the heinous weather they were battling through.

Charlotte alternated between seated and kneeling every 2 hours or so. One of the main practical differences between a kayak and a conversion kit is the lack of foot pedals.  For this reason, taking it in shifts is easier on your lower body. Switching the conversion paddle end for the SUP handle is simple enough to do on the go.

“When it was calm I actually stopped paddling and sat on my board, took the blade off and put it under the kit on the bow and popped the handle on, all on the water. It’s quite easy to do because the board is so stable.”

All loaded up and ready to go, the SUP’s bag is great for stashing gear.

How did the SUP perform compared to a sea kayak?

The weather in the Great Glenn changes rapidly, particularly in Loch Ness which actually has its own lifeboat station. In the span of a few minutes things can go from sunny and calm to giving you an absolute battering from wind and surf. Charlotte told me that in rougher weather, at times she actually felt more relaxed on the paddleboard than in a sea kayak. 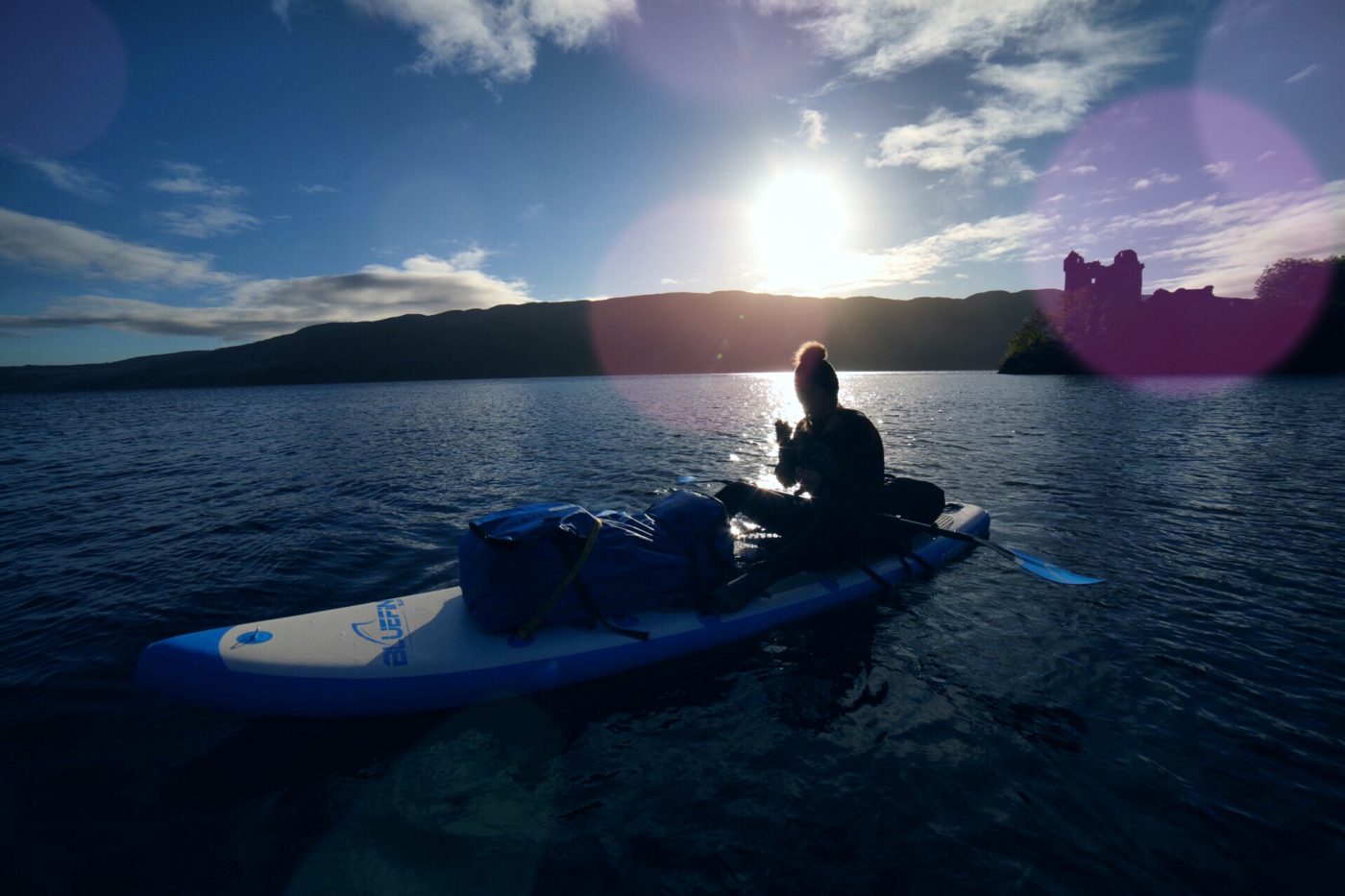 The finest waterfront dining Loch Ness has to offer.

Any tips for kayakers considering this?

Obviously we aren’t advocating that a SUP with a conversion kit can take the place of a sea kayak entirely. It is a Stand Up Paddleboard after all and it’s primary use will always be to paddle while standing. What we are saying is that even career kayakers can enjoy a conversion seat and the versatility it provides.

Paddleboards and kayaks both have their place, it all comes down to the individual and what kind of trip you’re going on. It’s also nice to know that if you do choose to travel with a paddleboard, you aren’t restricted to standing on 2 feet the entire time.

iSUPs are easy to carry even when inflated which makes portages super easy.

When is a SUP/Kayak conversion kit useful?

We’d love to hear your thoughts on using a SUP for seated kayak style paddling and where you’ve tried it so please give us a shout in the comments below.

A Big Bluefin Thank you:

Charlotte Lever put our board and conversion kit to the test and took the time to tell us about it. We loved hearing her first hand account of how our gear dealt with Loch Ness and look forward to more tales of adventure in the future!