Local filmmaker Ian Burton and his partner Charlotte Lever, a clinical researcher, recently added a couple of SUPs to their family. Within just 6 weeks the pair was ready to tackle Scotland’s Great Glen by SUP touring board. I was fortunate to speak with them both about the trip, how they prepared and what they’d do differently next time around.

I should mention that Charlotte and Ian are both experienced outdoors people and have pretty sporty backgrounds. You know the type, you won’t catch them watching Netflix when they could be sailing, kayaking or climbing. With hobbies like these their baseline fitness is pretty high.

Considering their expertise in adventure, they planned to traverse the entire 60 miles of the glen from Fort William to Inverness in 3 days.  Due to this same expertise, they saw the nasty forecast on day one and made the call to shorten the route by 20 miles. As Ian told me

“It makes more sense to do part of a trip well than all of it miserably.” -Ian Burton 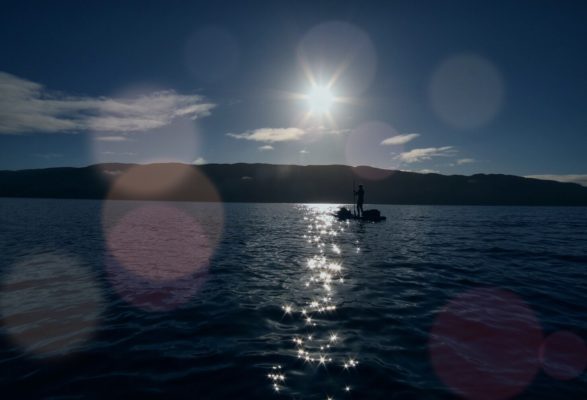 Preparing for Expedition by SUP

Prior to heading for the Caledonian Ian and Charlotte had never paddled a SUP more than 5 miles in one go. They spent 6 weeks slipping in sessions whenever they could on the charming canals around Hebden Bridge. These conditions were by no means remote or challenging aside from the aggressive local geese.

If you’ve spent much time around canals, you know they are not appealing places to swim. Although the area is beautiful, there may be no better training than avoiding a dip in the Rochdale. No doubt this helped sharpen Ian and Charlotte’s skills on their new inflatable touring SUPs. All joking aside, what they lacked in SUP mileage they made up with gusto and considerable sporting expertise.

Had a fantastic weekend on my bluefinsups paddle board on the Rochdale canal. A good place to practice because you would want to fall in so teaches good balance. Can’t wait to get going on our Caledonia canal trip in a month and then onto some ocean paddling around Anglesey in winter. #sup #bluefinsup @ianburtoncamera image 4/6

Packing for a SUP Expedition

A 3 day camp & paddle expedition in mixed weather requires a fair amount of kit. The first thing to consider when packing is what conditions to reasonably expect. The second is what conditions you don’t expect but may arise anyway. Ian and Charlotte brought a whopping 50 kg of gear on their very first SUP expedition. In retrospect they would have taken less and could have gotten up more speed with lighter loads.

The key to Ian and Charlotte’s packing technique was organisation. This may go without saying but everything should be carefully stowed by category and in a sensible order. Essentials like tents and sleeping bags were packed in the best of their dry bags and placed at the bottom of the stack. Snacks, water and things they might have needed through the day were placed where they could be reached quickly without drenching the rest of their stuff.

Ian and Charlotte took 50 kg of kit on their trip. 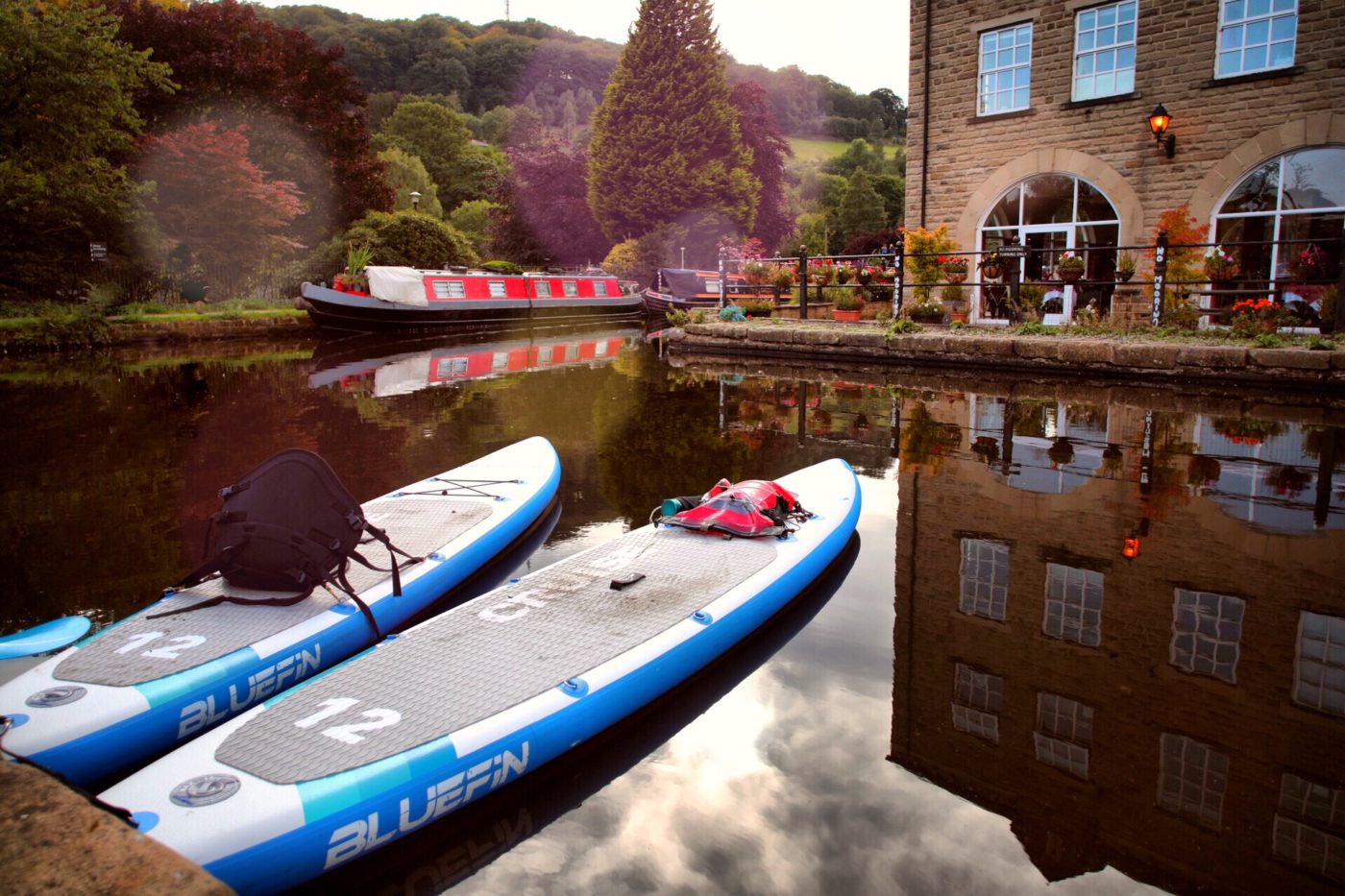 Charlotte and Ian did their 40 miles on a 12’ Bluefin Cruise each. Ian weighs about 80 kg and loaded his sup with most of their 50 kg in kit. He still managed the 40 mile journey comfortably. If you plan to do long range touring and only that, you might want to invest in a more specialised board.

“When we realised we’d only been paddling for 6 weeks we were a bit gobsmacked we were so comfortable. It was a testament to the stability of the board.” – Ian Burton

The absolute best touring SUP is one that allows you to paddle the straightest and farthest with each stroke while requiring the least correction. Specialty race or touring boards are ideal for distance as they are long, thin and fast. They also have narrower decks and therefore require better balance. This isn’t necessarily a trade off so much as a consideration if you only plan to own one board.

All around iSUPs in longer lengths like Charlotte and Ian used are a good choice for touring if 100% of your paddling won’t be expedition length. A 12’ board designed for versatility paddles true with ease but is also fun for casual paddling. Specialised touring and racing boards allow you to cover more distance faster but are not as easy to manoeuvre from side to side.

Set off after 10:00 with absolutely abysmal weather and lashing rain. The bright side of the howling wind was that you could average about 4 knots without much effort when it blew from behind. Surfing in the Lochs was a blast due to the downwind action. In comparison, once in the canal and protected by trees it almost felt like paddling through treacle. Charlotte figured out early on that she preferred the familiarity of seated paddling. She alternated between kneeling and her kayak conversion kit for most of the trip.

#WildCamping in October on a #SUP Boarding trip up Loch Ness yesterday, such an awesome time with @ianburtoncamera. 40miles paddled from Laggan Locks to Inverness and we hadn’t even stood on a paddle board 6 weeks ago, let alone paddled across a country. Happy times but slightly shattered now. #LochNess #SupBoarding #paddle #Boarding #Scotland #suppaddle @supboardermag @supthemag

Set off at dawn with the loch so rough it felt like open ocean. Incredibly windy but not much rain. The combination of surf and rocky beaches made it very difficult to stop for lunch. When they finally found an approachable beach, they set up camp for the night and dried out. Continuing in conditions like that could have made for trouble if they’d had to paddle in the dark.

“Don’t bite off more than you can chew in one day, it’ll always be there next time.” -Ian Burton 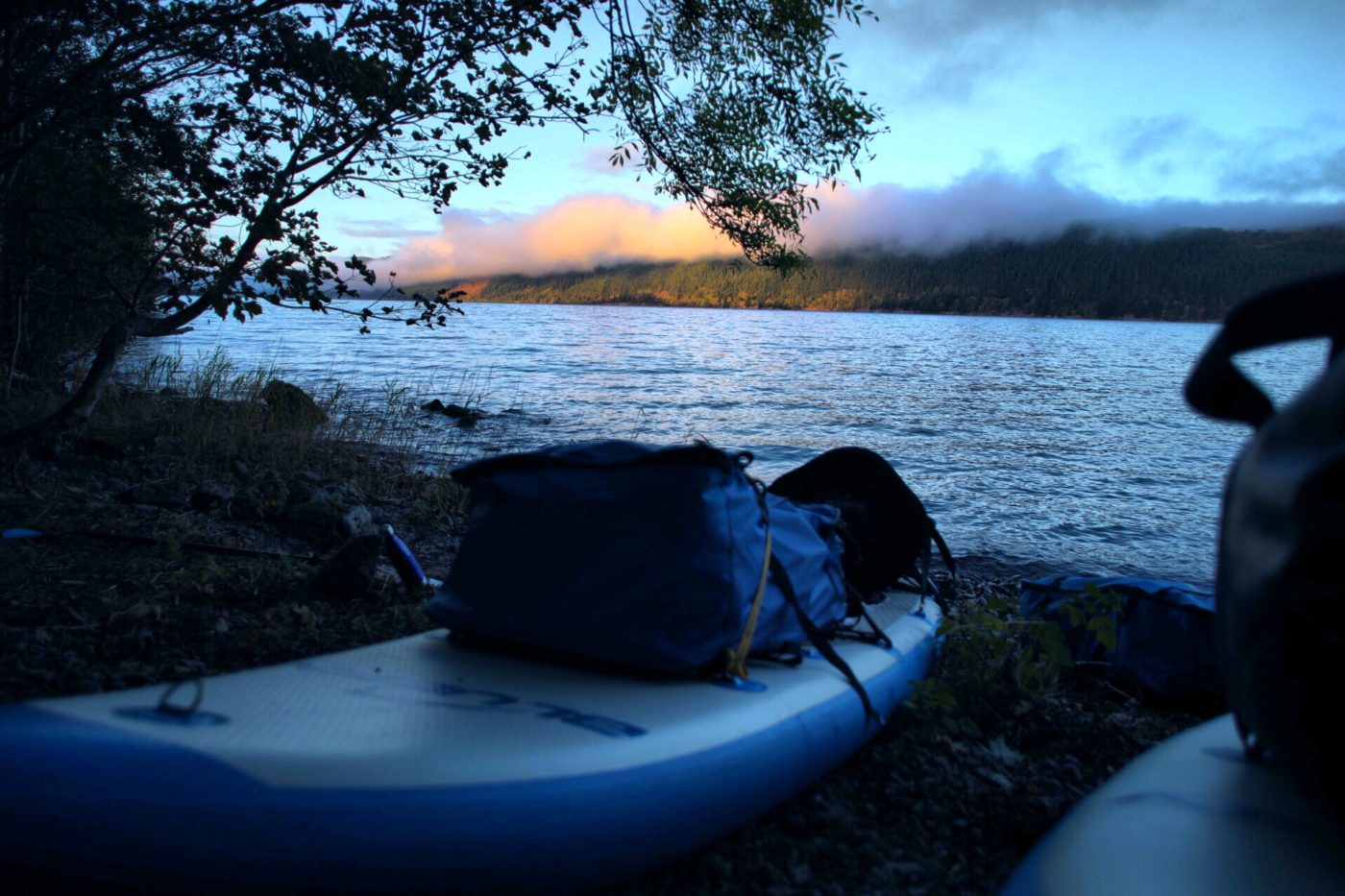 Extremely mixed conditions on the final day. The weather in Loch Ness changes from minute to minute and can feel like being in the middle of the Pacific. A moment later it can be a beautiful, calm sunny day. This area is tricky due to the unpredictable weather, busy marine traffic and frigid water year around. Waiting for a nice day isn’t always an option in climates lacking a distinct climate. The trip finished at Inverness where they traded the tent for a bed and a hot shower at a friend’s house.

“Make do with what you’ve got or do nothing all.” -Ian Burton 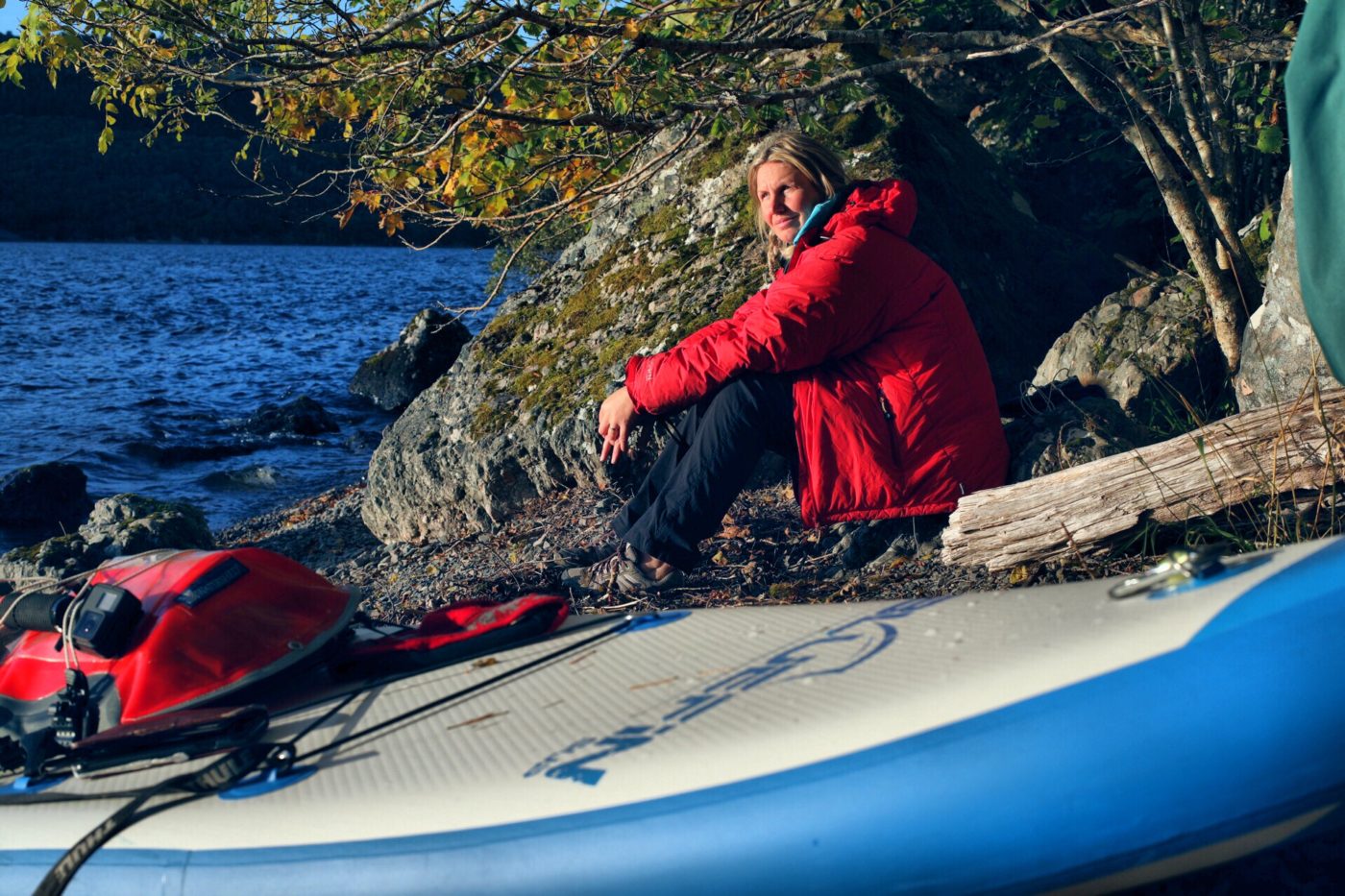 Tired but fulfilled after a full day SUPing

What they’d do differently next time

Lunchtime next to Urquhart Castle in Loch Ness

Paddling 40 miles in 3 days while sleeping under the stars on stone beaches is no doubt pretty cool. If this sounds a little too hardcore for you, it wouldn’t be hard to tailor an easier route. One great thing about the Caledonian canal is that there is public transportation and plenty of access to towns the whole way along. Fortunately you’ve gt options due to both the versatility of this route and SUP itself. It would be easy to design a trip that was more airbnb and fine dining than wild camping and open fires.

Don’t let your fitness level stop you and don’t wait for stars to align. Consider your capabilities and schedule realistically. You’d be surprised how much you can accomplish and how much fun you’ll have by getting out on the water with you SUP.

One of many great things about inflatable boards is that they pack down and stow away in a snap. If your trip doesn’t go as planned, no problem.  You can make haste for a roll top bath and high thread counts without much hassle. Just pack up and catch a bus to civilisation.

Have you logged many miles this year? If so we’d love to hear about it so please leave us your thoughts in the comments below.

Ian Burton and Charlotte Lever put our boards to the test in pretty hairy conditions on the Caledonian Canal. They also took all of the images featured in this post. Thanks guys!